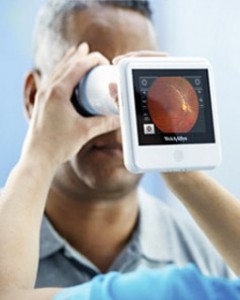 Diabetic retinopathy is the leading cause of blindness in patients under 50 years of age. Diabetes is a disease affecting the small blood vessels called capillaries. Capillary damage occurs slowly and gradually.
In insulin-dependent diabetes, affecting mostly young people, ocular changes are rarely seen 5 years from initial diagnosis. In noninsulin-dependent diabetes fundus is often more impaired early when the diagnosis is made. The reason is that diabetes can be asymptomatic and may exist years before.
Progression of the disease leads to two major complications each of which can lead to vision loss. The first complication - swelling of the macula (macular edema) occurs because of the excessive permeability of the damaged walls of the capillaries. The second complication consists in the growth of new defective easy bleeding vessels (proliferative diabetic retinopathy). These complications may occur separately or simultaneously.
Macular edema affects the central part of the retina and leads to reduced vision. Patients complain of blurring of vision, deformation of objects seen by the affected eye. The diagnosis is proved by Fluorescent Angiography and/or Optical coherence tomography. In a case of diabetic retinopathy laser treatment is provided for prevention of vision loss, not for better or improved vision. The laser effect (reducing swelling of the macula) is coming gradually - from two to four months.
The proliferative retinopathy causes blockage of the blood vessels of the retina. Thus, the retina sends signals that stimulate the growth of new blood vessels. These newly formed vessels have a poor structure of the wall and they may bleed inside the vitreous cavity. When there is larger vitreous hemorrhage the affected eye completely loses sight. Any haemorrhage leads to development of adhesions between the vitreous and the retina. This may result retinal detachment if there is a subsequent shrinkage of the vitreous. In this case of proliferative form laser therapy is longer and with much greater volume than that in a case of the macular edema. The therapy includes laser coagulum in the periphery of the retina. This cauterization destroys a large part of the damaged retina. The dead cells of the retina does not stimulate the formation of new blood vessels. It is observed that there is a cessation of growth of new blood vessels. Large haemorrhage that can't be resorbed need to be surgically removed. After the laser treatment vision is rather blurred for a few days or weeks.

Dr. Stanimir Troshev is one of the leading ophthalmologists in the country. In 2009 he founded the most modern eye clinic in the town of Stara Zagora… read more